Political changes initiated in Bulgaria in the end of 1989 led to profound social and economic reforms. Replacement of the country’s main political leader – Thodor Zhivkov put an end to the communist epoch and set the beginnings of a transition to pluralistic democracy and market economy. The process of democratization has been realized through conduction of nation-wide elections for representatives for the Bulgarian Parliament (National Assembly), regional elections and elections for the Bulgarian President.

Experts from different scientific areas have examined the results from the democratic elections. Bulgarian geographers have also been interested in the scientific interpretation of the returns. Bachvarov (1991, 1992), Boiadjiev (1994, 1998, 2001, 2002) and Slaveikov (1994, 2002) have conducted geographical researches connected with the elections in post-communist Bulgaria.

The general aim of this research is to present the most important characteristics of the electoral process in Bulgaria in the period 1991-2001. The elections for members of Bulgarian Parliament have been of main interest.

Electoral System of Post-Communist Bulgaria
According to Bulgarian legislation, the elections for Members of Parliament are held on the basis of general, equal and direct suffrage by the secret ballot. The main law defining the terms and conditions for the election is the Elections of Members of Parliament Act, which was promulgated in State Gazette No. 37/13.04.2001. It provides for the right of all Bulgarian citizens above the age of 18 as of the Election Day inclusive, except for those under legal disability or persons serving imprisonment sentences, to vote. Each voter is entitled to one vote. Elections are held on the basis of the proportional representation system with election tickets of parties, coalitions and independent candidates registered in multi-seat constituencies. The D’Ondt method is applied to the allocation of seats among parties and coalitions at a nation-wide level. According to Elections of Members of Parliament Act (2001) the parties and coalitions which have carried at least four per cent of the valid votes at a nation-wide level, as well as the independent candidates who have carried at least as many votes as the constituency quota, participate in the allocation of seats. For the purposes of holding elections, the territory of the country is divided into 31 multi-seat constituencies, including 3 constituencies in the city of Sofia and 2 constituencies in the city of Plovdiv. The other constituencies coincide with the boundaries of administrative regions. The Central Election Committee determines the number of seats for each constituency on the basis of a uniform representation rate for the country depending on the number of the population while applying the largest residual method.

Elections for Members of Parliament were held four times from 1991 to 2001. During the entire period the total number of representatives in the National Assembly remained constant – 240 deputies. However, some of the multi-seat constituencies, such as Vratsa, Kardjali, Silistra, Haskovo and Shumen lost a number of seats to be allocated according to the valid votes while other constituencies increased the number of representatives (Burgas, Varna, Pleven, Plovdiv-district and Sofia 3). This was a result from the changes in the number of population in the constituencies.

National Electoral Characteristics
The electoral activity (the percent of voters from the number of electors) was constantly dropping from 1991 (83.94 percent) to 1997 (62.23 percent) but in the last elections in 2001 there was a slight rise of about 5 per cent (Fig.1). 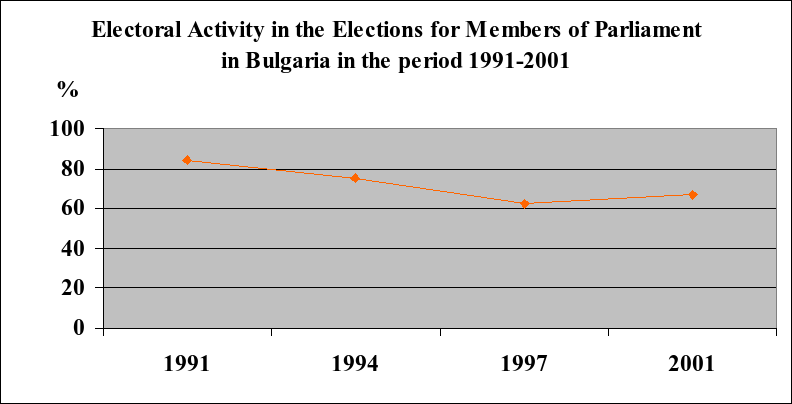 In the beginning of the period, Bulgarian citizens believed that through the Members of Parliament they elected their votes would lead to quick economic and social reforms. People considered that new politicians would implement radical measures to increase the prosperity of society. Unfortunately, this did not happen and the electorate was strongly disappointed by the political parties and the politicians and this brought about a decrease of voters with more than 15 per cent. In 2001, there was a slight rise in the electoral activity because a new political movement led by an heir of a former Bulgarian monarch appeared on the political stage. The electorate identified this new political phenomenon with new hope.

Those who defend party list proportional system argue that political parties occupy an important place in any representative democracy and that the list system helps to ensure that the role of the parties will be maintained and ensured. On the other hand, parties acquire too much power when they can determine whose names will appear at the top of the lists. Those elected on the basis of this system owe primary allegiance to their parties than to their electorates (O’ Neal, 1993). The number of parties and coalitions participating in the parliamentary elections in Bulgaria increased significantly – from 38 (1991), 48 (1994) to 54 (2001). However, only three of them had representatives in each of the National Assemblies elected in the period from 1991 to 2001. These were Bulgarian Socialist Party (BSP), Union of Democratic Forces (UDF) and Movement for Rights and Freedoms (MRF) (Fig. 2). 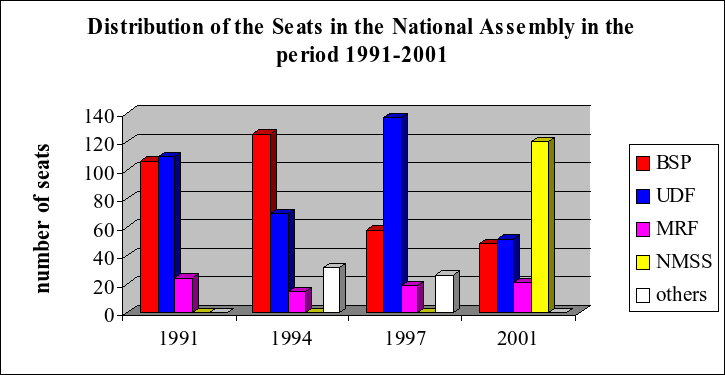 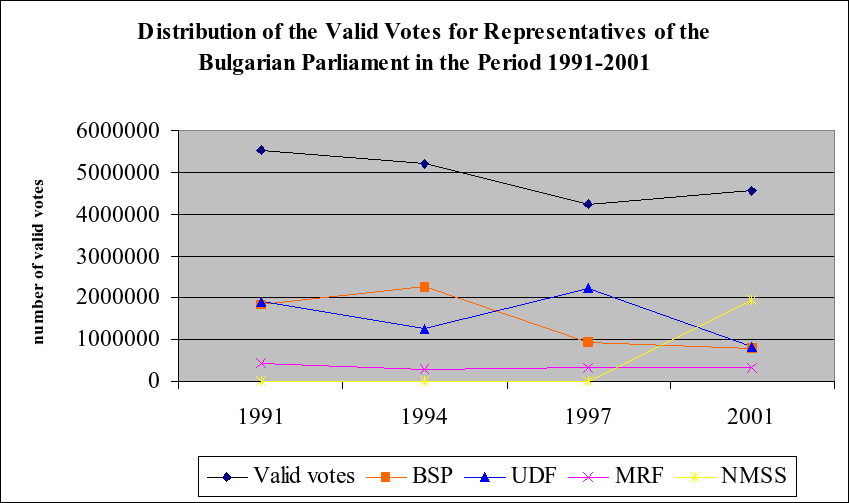 In 2001 a new political formation, led by the son of a former Bulgarian monarch and called National Movement Simeon the Second (NMSS), was introduced and managed to gain 42.73 per cent of the votes and half of the seats in the National Assembly. NMSS was a typical example that a new political party, registered a few months before the Election Day without built political structures, could win the confidence of the Bulgarian electorate and outvote the existing political formations. The main reason for this phenomenon was the fact that a person who had authority with the Bulgarian electorate led the Movement and the election campaign was professionally conducted. Mr. Simeon Saxe-Coburg-Gotha made a promise that he and his team would put in order the Bulgarian economy, which would lead to considerable enlargement of the population’s incomes and a higher standard of life in the next 800 days. Thus, he managed to gain the confidence of the Bulgarian society. Voters from different age, ethnic and professional groups, supported the party. NMSS won the elections with 120 seats in the Parliament. Very soon after the elections it came out that the Bulgarian electorate’s trust was betrayed. Mr. Simeon Saxe-Coburg-Gotha was appointed Prime Minister and had the political power of the Executive, but poor people continued becoming poorer and the rich continued becoming richer. The governing party claimed for “a new moral”, but did it mean “a better moral”? Bulgarian citizens lost confidence in NMSS and the party received only 9 mayor seats out of 264 in the regional elections held in 2003.

Bulgarian Socialist Party was mostly popular among the Bulgarian ethnic group and very unpopular in constituencies highly populated with representatives of the Turkish ethnic group. Traditionally, this political movement had a large number of votes in constituencies where the Turkish ethnic group was less then 1 per cent of the total number of the population, such as Vratsa, Vidin, Montana, Pernik, Yambol. BSP gained its support mainly from the rural regions in Bulgaria, populated by older people from the Bulgarian ethnic group. It was also comparatively well supported by representatives of the Roma ethnic group.

Union of Democratic Forces is very well accepted by young and middle-aged people from the Bulgarian ethnic group in the cities and large towns of Bulgaria. The alliance receives constant support in Sofia 1, Sofia 2, Sofia 3 and Plovdiv – town constituencies. UDF is not popular among the Roma ethnic group, who preferred voting for their main political opponent – the Socialists.

National Movement Simeon the Second led by Mr. Simeon Saxe-Coburg-Gotha, who is the son of a former Bulgarian monarch, gained a nation-wide support by the Bulgarian electorate in the elections for representatives of the Parliament held in 2001. NMSS received seats from all constituencies except Kardjali where the Movement for Freedom and Rights obtained all political mandates. In 2001 NMSS was a newly introduced political formation, unknown by the Bulgarian society, which was highly disappointed by the conventional political “players” (BSP and UDF).

Conclusions
Democratic elections held in Bulgaria after the fall of communism were a challenge both for the society and the political elite of the country. “Electors” and “elected”, main players in the “performance of elections”, had significantly complicated their political behavior from the beginning of 1990s to 2001. The first democratic elections after a long period dominated by governance of a single political party roused the interest of the society in the electoral processes. Citizens were possessed by political euphoria, which made them participate in the elections, and raised the electoral activity. In the beginning of the process of transition, governments implemented economic reforms very weakly and they did not lead to quick improvement of the standard of life in the country. That disappointed ordinary people and by the end of the 1990s the participation of citizens in elections decreased significantly. However, the number of parties wishing to play a crucial political role increased. In the beginning of the new century, a process of party fragmentation dominated the Bulgarian political space. A new class of “professional politicians” emerged in post-communist Bulgaria. Strive for influence and leadership in the limited political space led to fragmentation of existing parties and emergence of new political movements. However, only a few of them (BSP, UDF, MRF and NMSS) managed to retain their role as an active factor in Bulgarian political life.

Although the period in which democratic elections were held in Bulgaria is not very long, I identify some regions with constant electoral support for a particular political party. Electors in the Northwestern region of Bulgaria supported mostly the successors of the former communist party – BSP. Its main opponent UDF had a strong backup in the capital and larger cities. I argue that MRF was largely dependent on the ethnic Turks’ vote as the movement gained the majority of its mandates in regions highly populated with ethnic Turks and had very little support in regions dominated by ethnic Bulgarians. Results of further elections (after 2001) implicated that MRF had a successful political strategy because it managed to enlarge the geography of its support.

Electoral processes in post-communist Bulgaria demonstrate that the country is already a functioning democracy and certain well-defined tendencies and regularities can be observed in elections.

Acknowledgements: This text was presented as a paper on the International Conference “Remapping the Southern Tier of Post-Socialist States: Politics, Economics, Environment, Identity” in Portorose, Slovenia in 2004. I thank Professor Robert Kaiser (University of Wisconsin – Madison) and the National Science Foundation for organizing the conference and for granting me participant support to attend the event.

Christina Jordanova is a PhD-student at Sofia University, Bulgaria. Her dissertation is a Geographical analysis of the agrarian reform in the Northwestern Bulgaria. Since September 2005 she has also been working as an expert in Integration Policy Directorate of the Bulgarian Ministry of Agriculture and Forestry.

Boiadjiev, V. (1994). The Elections for Members of Parliament in 1991, political and geographical analysis of the performance of Bulgarian Agricultural National Union, Veliko Tarnovo.

Boiadjiev, V. (1998). “Electoral and Geographical Differences in Nessebar municipality”, Papers for 100 Anniversary of the Geography in Sofia University, Sofia.

Slaveikov, P. (1994). “Political Geography Analysis of the Correlation between the Major Political Forces in Bulgaria (BSP and UDF)”, Problems of Geography, 1.

Slaveikov, P. (2002). “A Comparative Geographical Analysis of the Results in the Elections 1997 and 2001 for Bulgarian Parliament”, Geopolitics, Regional Development, Geographical Education, Sofia.

1 Spearman Rank Correlation is a technique used to test the direction and strength of the relationship between two variables. In other words, it’s a device to show whether any one set of numbers has an effect on another set of numbers. It uses the statistic Rs which falls between -1 and +1.

Om Christina Jordanova 1 artikel
Christina Jordanova is a PhD-student at Sofia University, Bulgaria. Her dissertation is a Geographical analysis of the agrarian reform in the Northwestern Bulgaria. Since September 2005 she has also been working as an expert in Integration Policy Directorate of the Bulgarian Ministry of Agriculture and Forestry.